What is an IP Address?

In a TCP/IP environment, end stations communicate seamlessly with servers or other end stations. This communication occurs because each node using the TCP/IP protocol suite has a unique 32-bit logical IP address

Each company listed on the internetwork is seen as a single network that must be reached before an individual host within that company can be contacted.
Each company network has a unique two-part network address:

The hosts that populate that network shares those same bits, or network number.
The remaining bits, or host number, are a unique identifier of each host within that network.

When IP was first developed, there were no classes of addresses. Now, for ease of administration, the IP addresses are broken up into classes.
Three Central Classes

Listed below are the five classes of IP. The first three with visual descriptions are the most commonly used in networking. 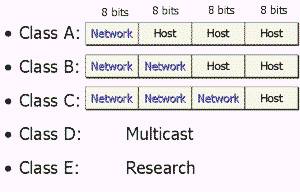 There are only eight network bits in the Class A address, and 24 bits in the host field. So, few Class A networks, each consisting of many hosts, exist. There are more Class B and Class C Networks.
This scheme allows the addresses to be assigned based on the size of the network. This address design was based on the assumption that there would be many more small networks than large networks in the world

Address classes allow addresses to be assigned as groups based on the size of the network.

However, any address that begins with 127. is considered a loopback address.

The Next Class is B class

The Next Class is Class C

Class E networks are defined by having the first four network address bits as 1. That encompasses addresses from 240.0.0.0 to 255.255.255.255. While this class is reserved, its usage was never defined. As a result, most network implementations discard these addresses as illegal or undefined. The exception is 255.255.255.255, which is used as a broadcast address.

Every device and interface has its own non-zero host number. A host number with a value of zero refers to “this network” or “this wire”.

The total number of available hosts on a network can be derived by using the following formula: 2n-2, where n is the number of bits in the host portion.

IPv4 addresses are composed of two parts. The first numbers in the address specify the network, while the latter numbers specify the specific host.

The original IPv4 protocol is still used today on both the internet and many corporate networks. However, the IPv4 protocol only allowed for 232 addresses. Addresses in IPv4 are 32-bits long. This allows for a maximum of 4,294,967,296 (232) unique addresses.

IPv6 was developed by the Internet Engineering Task Force (IETF) and was formalized in 1998. This upgrade substantially increased the available address space and allowed for 2128 addresses. Addresses in IPv6 are 128-bits, which allows for 3.4 x 1038 (2128) unique addresses. In addition, there were changes to improve the efficiency of IP packet headers, as well as improvements to routing and security.

A public IP can be static or dynamic depending on the user’s service type. A static address is unchanged and is used for hosting websites, static servers. On the other hand, dynamic addresses are chosen from a pool of available IP addresses and will be changed each time user connects to the internet.

Private IP are addresses allocated by Inter NIC that allow organizations to create their own local network that can work inside the organization. This network range is unknown to the outside world

There are three private IP address ranges in class A, class B, and class C as we discussed above.